By MARSHAFOTTLER
The powder bath, a man’s closet/dressing room/bath area, and the living room of opulent 17,000-square-foot home on the south end of Longboat Key picked up des awards  at the 2007 Kitchen/Bath Industry Show (K/BIS) in Las Vegas.

The glamorous rooms are among 44 North American prize winners that were selected from 565 entries — a record number for the annual National Kitchen & Bath Association (NBKA) Design Competition that year. The Sarasota designers responsible for the winning rooms are Tracey Scalzo, of EuroTech Cabinetry, and Fabiola Softas, ASID, of Anne Folsom Smith Interior Design.

The powder bath earned an honorable mention; the man’s closet/dressing room/bath area was awarded third place in the nation. The living room, which measures 46 by 26 feet, earned the second-place award.

The competition spanned 11 categories, including various kitchen and bath groupings, as well as showrooms, non-residential spaces, and a class simply called “other rooms” — in this case, the Longboat Key house’s living room that includes a gaming area and bar. EuroTech Cabinetry entered the rooms in the Las Vegas show, and Scalzo, who has been with EuroTech for 18 years, was in Nevada to receive the accolades.

“To be selected from such a large field is really an honor,” said David Asher, owner of EuroTech. “This Longboat Key home is the largest and most comprehensive project we’ve ever done. All the cabinetry was custom designed, some of it crafted here in Sarasota. It was a massive undertaking.”

Asher, whose company has won “five or six” first-place awards in the competition in recent years, said the judges seem to be favoring contemporary designs. This house, with references to a 15th-century Venetian pallazzo, is traditionally styled.

“One of the things that may have made it more difficult for us this year is that contemporary has come back real strong,” said Asher.

The home took five years from start to finish and is owned by a retired couple from the Midwest who are visited often by their five grown children and their grandchildren. Clifford Scholz was the architect; Collingwood Construction Group, the builder.

“Yes, it’s a big house, but everything has a comfortable and homey feel,” said Softas, the interior designer, who has done four other residential projects for this family over the past 10 years. “This isn’t a hotel, and all of us on the project kept in mind that this is a family home to be enjoyed by three generations. So for the furniture, I used lots of cozy leather and chenille for comfort, along with some damask for elegance. All of the furniture was custom designed for the spaces, and the homeowners chose a neutral color palette with the central color being sand, because we wanted to reference the outdoors and the beach. For accents, we used black, gold and some of the jewel tones. We also introduced color with inlays of glass and stone on the counters and floors.”

The powder room on the first floor features Old World European styling with cherry cabinetry, onyx counters, fancy moldings and a marble floor. The room is divided into two spaces; the first has a double vanity and a chaise lounge for relaxing. The inner room includes another vanity area and an enclosed toilet room. The trompe l’oeil-painted wall treatment replicates draped fabric.

The husband’s dressing room, closet and bath is worked in lustrous mahogany with ornate fluted columns and a vanity area that is 14 feet long. The gray/white granite floors have marble inlays in a purple hue. The marble walk-in shower has a clear view of the Gulf of Mexico, with doors designed by Hoffman.

The multi-purpose living room is the gathering place for three generations of family. The south wall is a granite-top bar with two under-counter dishwashers and refrigerators, as well as an icemaker, two wine coolers, and lighted shelves for glassware. The north wall houses the entertainment unit and is ornamented with columns, some of which open to store DVDs. Agaming area is another defined area in the space. The 608-square-foot coffered ceiling includes an original painting. The cabinetry throughout the room is maple with a glaze-and-crackle finish.

EuroTech has won 13 NKBAdesign awards in the past 14 years; Scalzo has been
recognized in this particular kitchen-bath competition seven times since 1993.

The National Kitchen & Bath Association Design Competition focuses national attention on talented designers who specialize in kitchen and bathroom installations. Over a three-day period, a panel of certified designers judge entries based on safe, functional use of space; innovative design solutions; professional presentation; and overall aesthetics. ?

Eurotech HAS ANOTHER AWARD

Sarasota kitchen Published Again Eurotech has been published in a number of magazines. Locally, we have been featured in two issues of…

Sarasota Cabinets Eurotech Published FIVE TIMES IN MARCH, 2006 Four of our projects were published in local and state magazines…

Sarasota Bathroom TWO EUROTECH EXCLUSIVES In our quest to offer our clientele the latest in unique, innovative and durable products…

Tracey Scalzo and David Asher, both from EuroTech, have both been honored with multiple design awards over the last decade…

Sarasota Kitchen Trends WHAT’S HOT / WHAT’S NOT As with any industry, the popularity of materials and styles grows and…

Until recently, most of our work was for individual clients, interior designers and a few high end contractors and remodelers….

Whether looking for Sarasota kitchens, baths or custom furniture, our clients are significantly more knowledgeable than ever before. They know…

Sarasota Cabinetry Legends Bay: A Lookback Several years ago we were selected to supply cabinetry for Gibraltar Homes at Legends Bay. This was… 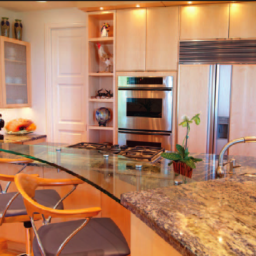 Sarasota, Kitchen Cabinet EUROTECH WINS AGAIN Our accolades mean a lot to us, back in 2004 we were honored to…

Sarasota Cabinetry Come See OUR NEW DISPLAYS! OR VISIT US ONLINE AT www.eurotechcabinetry.com